I have now been working with the carvings for some weeks. As mentioned before, the dominating type of rock in this area is slate. So the surface is very uneven, and does not feel so smooth. Many of the panels have not been documented since Arthur Nordén in the 1920’s, so it has been possible to find new carvings, which were not present on his documentations. The carvings have been painted many times, so our job is to clean away algaes and lichens, and repaint the carvings. 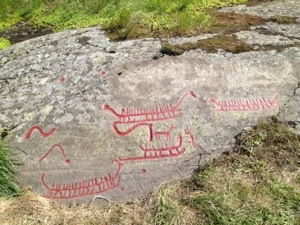 In this week, we finished the work at Leonardsberg. The two panels were situated on a field with sheep, so now and then they visited us, and tried to see if they could eat some of our equipment… I got the opportunity to paint the largest human figure in Norrköping 🙂 It is 0,7 m. high and is one of the few human figures from this area, which have elongated calves. When painting carvings, it is nescesarry to locate the edges of the motive, so it really force you to investigate the details. It seemed as if the line, which is hold by the adorant, ends in a lance in the right end, so it was not just a line, as the previous paint presented. But according to Nordéns drawing, the peak of the lance should be in the other end… It could be interesting to do some photogrammetry of this motive, in order to study the pecking marks, and check if some details have been updated. 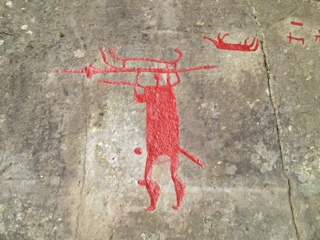 Yesterday we started to paint one the panels at Himmelstalund, called ” the axe panel”. It was a warm day on the rock, but we had visitors, and some children also came to us, and wanted to know it was difficult to paint. 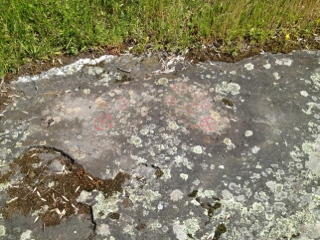 Some motives from “The axe panel” at Himmelstalund, before (photo: Mette Rabitz) 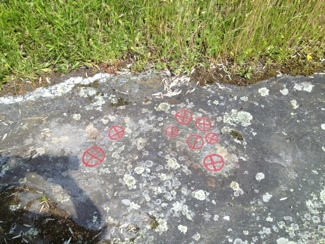 After my painting (photo: Mette Rabitz)