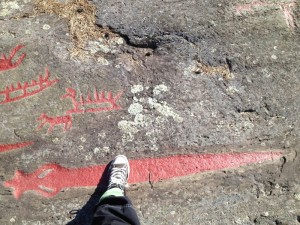 The “famous” sword from the Ekenberg panel (Raä 23). Note the size of the sword compared with my foot, which is a size 37 (photo: Mette Rabitz)

Weapons: In Norrköping the carvings contain a lot of weapons, sometimes in realistic size. The Ekenberg panel displays many full-sized swords, and also the “famous” sword, which gave weight to Bror Emil Hildebrands argument that the rock carvings should be dated to the bronze age. What is interesting is that in Norrköping, most types of weapons are dated to the early bronze age, for instance swords and axes which could also look like lurs. In contrast, the weapons displayed on many of the panels in Tanum, can often be dated to late bronze age, like shields and swords. Another interesting contrast is that in Tanum, the weapons etc. are often connected to human figures, while in Norrköping the weapons are often  displayed isolated, without any connection to human figures. It is as if the two areas display the periods in different ways. -In Tanum some spirals seem connected to the type of spiral, which is displayed as decorations on items from the early bronze age, for instance belt plates and shields. While the same period is represented with swords and axes in Norrköping. 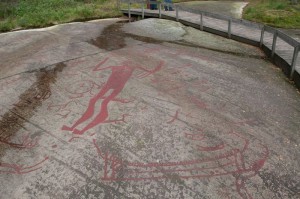 Human figure from the Litsleby panel in Tanum. The height of the human is 2.8 m. (Photo: Mette Rabitz). 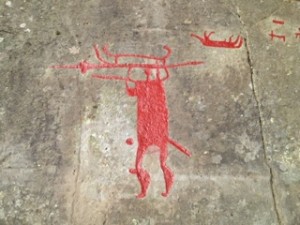 Human figure from the Leonardsberg panel in Norrköping. The height of the figure is 0,7 m. (photo: Mette Rabitz). 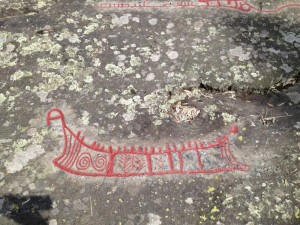 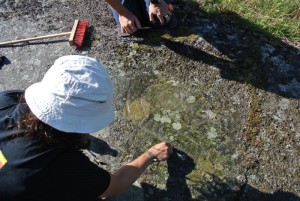 Odd looking type of prow, under thick layers of algaes and lichen, from Karlsberget in Norrköping (photo: Theres Furuskog).

Due to differences in rock type, there must have been differences in the proces of carving, and also in the use of tools to carve with. But the different rock types also means a huge difference, when painting the carvings. When painting rock carvings, one can either use non-permanent paint or permanent paint. The non-permanent paint I know of, is white, and consist of water and chalk. The consistency of the mix should be like milk with water. I have been working with this type of paint, when I have been participating in fieldwork at Tanums Hällristningsmuseum. This paint is also sometimes used by the researchers, who document with tracing. -In order to see, what to trace, or alternatively the outlines of the carvings can be chalked before tracing. The technique is to kind of dab the paint into the rock, while moving the paintbrush very little.  You may have a look at the video below.

When I worked in Norrköping, we painted the carvings with permanent red paint. First the paintbrush was dipped in water, before dipping it into the paint. Hereafter the carving was paintede, by slightly moving the paintbrush back and forth. The techniques is somehow a little different, compared with using non-permanent paint. This is due to differences in consistency of the paint, but also depends on the surface of the rock, in Norrköping the surface was very smooth and in Tanum it was very rough. 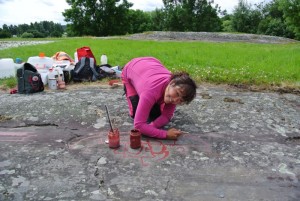