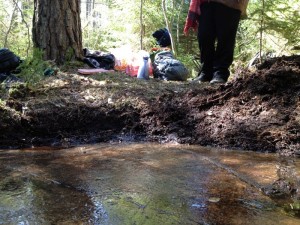 Depending on the time-span, since the previous documentation, some layers of mud and moss could have overgrown the panel. This is an example of many years of growth of vegetation, e.i. moss and pine-trees. The mud is created from decomposited pine-needles, moss and roots. It is nescessary to remove these layers, since the moist from the vegetation has an acid effect on the rock surface + it is impossible to document a wet surface, so removal of the vegetation around the edges, will make the surface dry somehow quicker. (Photo: Mette Rabitz) 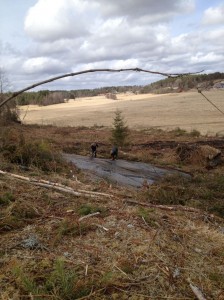 Another scenario could be to find the panel, after removal of the forest. This panel was covered with trees and branches. The rock surface was attacked by lichens and algaes, which in combination with the moist from the overlying vegetation, made the surface very slippery! So it can sometimes be a quite (balancing) challenge to recover a panel! (Photo: Mette Rabitz)

Before the documentation, it is also a very good idea to do a “survey” of the panel at night with a flashlight. In this way the contours of most carvings will appear, and usually weathered carvings also appear. The carvings are chalked, and checked again in daylight. It is a funny challenge to take photos of the motives at night. There are many methods to do this, either one can take the photo, while the flashlight comes from one angle. Another option is to take the photo, while moving the flashlight, so the beam of light is moved up and down. If you have a camera, which can be set to take the picture with a long shut-time, you can also use a camera-flash to create a dramatic picture. 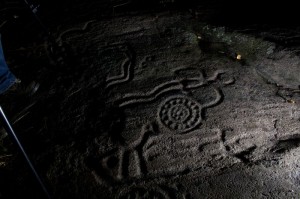 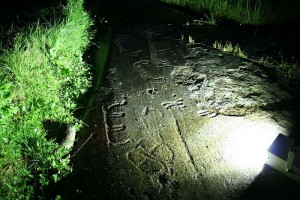